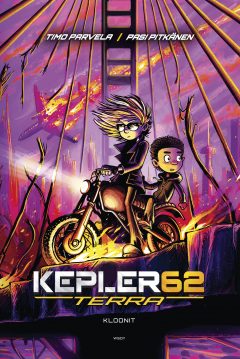 The third season, Terra, follows the young Kepler62 settlers as they return to Earth. Artificial intelligence has taken over their home planet, but the children are not ready to give up on hope for mankind to survive.

The spacecraft Gaia has landed on Earth, and the return is tougher than the young travellers could have imagined. Vegetation is withering away, and the despotic artificial intelligence that dominates the planet has driven humanity to the brink of extinction. The friends also wish to learn the fate of X’s father and cloned siblings. Joni’s new skills are beginning to blossom and that gives the children some renewed hope. But can one wonderboy truly save the world singlehanded?

The Kepler62 series of pioneer children settlers sent into space has been garnered with success both domestically and internationally. The series comprising of  a total of 13 books has been translated into more than 20 languages and over 150,000 copies of Kepler62 books have been sold in Finland.

2021, Nominated for the Finlandia C&YA Prize

‘A compelling reading experience based on the masterful interplay of text and image. Together, the unique world of illustrations and strong, skilfully crafted story are guaranteed to delight. Inspired by the gaming world, the narrative hooks the reader in quickly. The jury is especially pleased with the skilled creators’ ability to come up with new twists for the series.’ – Statement of the Finlandia C&YA Prize Jury