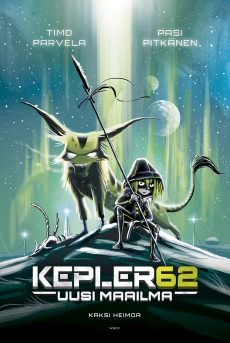 Joni, the youngest member of the original Kepler62 expedition, has been appointed leader. It’s a big responsibility and he’s struggling. The camp are facing grave difficulties: someone is out to sabotage everything they do and they keep leaving threatening notes. The crops have also started to disappear. The pests on this alien planet are ravenous and they eat everything the children manage to plant.

Joni is at a loss until X, a streetwise girl, comes to his aid. X, who was formerly homeless on earth, seems to feel totally at home on Kepler62.

“The details and the plot of Parvela and Sortland’s ambitious series are carefully polished. The series gets off to such a flying start that you are powerless to resist the pull of its most extraordinary world.” – Savon Sanomat newspaper

“Pasi Pitkänen’s illustrations are a major part of the book and in places the particularly dark pictures, which speak volumes, create powerful additional tension alongside the text…[The illustrations] are so well-placed within the text and are so successful that the pictures immediately catch the reader’s eye, move the story forward and, at the most exciting parts, even send a shiver down your spine.” – Nuorille ja naperoille blog