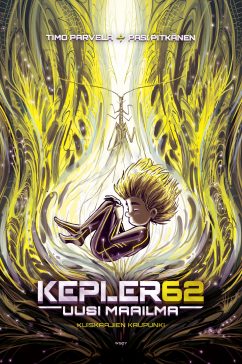 Joni has left the settlement in order to find his brother, Ari. He’s relieved to have X and one of the shadow-lions for company on the arduous journey he is embarking upon. Travelling in the previously unexplored parts of an alien planet is filled with surprises, and the travellers witness extreme beauty as well as ugliness — on big scale. And what’s the real truth about the powerful Whisperers? Are they gods?

2019, nominated for the Arvid Lydecken Prize

‘The details and the plot of Parvela and Sortland’s ambitious series are carefully polished. The series gets off to such a flying start that you are powerless to resist the pull of its most extraordinary world.’ – Savon Sanomat newspaper

‘Right from the very first book, Parvela and Sortland bring up many themes that add depth to their dystopia, while the book still remains primarily an entertaining and fast-moving novel. In this case, the entertainment and fast-moving plot are advantages as Kepler 62 also draws in children who tend not to enjoy books. But bookworms shall also enjoy the collaboration between Parvela, Sortland and Pitkänen. After all, who doesn’t love a well-written adventure?’ – Lumiomena blog

‘Pasi Pitkänen’s illustrations are a major part of the book and in places the particularly dark pictures, which speak volumes, create powerful additional tension alongside the text… [The illustrations] are so well-placed within the text and are so successful that the pictures immediately catch the reader’s eye, move the story forward and, at the most exciting parts, even send a shiver down your spine…’ – Nuorille ja naperoille blog