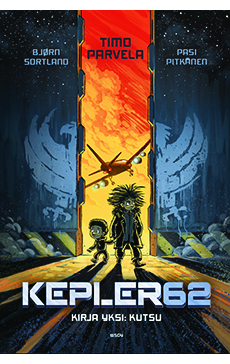 The Invitation is the first book in the bestselling Kepler62 series.

Overpopulation has caused earth’s natural resources to diminish and people are struggling to survive. Thirteen-year-old Ari is looking after his little brother Joni, who has fallen ill with a mysterious virus. The boys manage to get hold of a copy of Kepler62, the newest computer game that everyone’s talking about and which is supposed to be almost impossible to complete. Working together, the brothers manage the impossible and they soon discover that Kepler62 is more than just a game. It’s an invitation – one that the boys will accept.

“As if intended to capture the imagination of even the most reluctant of readers, Kepler 62 is gripping, fast-paced and entertaining in an almost movie-like way. The story grabs you for good, and takes you with it from book to book, from one cliff-hanger to the next. The rich, moody, and altogether astonishing illustrations make for another level of the story, and the way they unfold across the pages is somehow reminiscent of comic books, which is also very compelling. However, make no mistake, these are novels in full force, conveying themes and ideas that add depth and dimension to the dystopian plot. All in all, the books are captivating, and the authors are amazing creators of worlds in the best sci-fi literary tradition.” – Iustina Croitoru, Humanitas Junior, Romania

“This is a truly gripping adventure story with sensational illustrations included. The Countdown, with its pictures running across pages before ending with a surprise at the door. Suitable for everyone, this is the kind of book to take with you on the train and then feverishly wait for the next book.” – Grafschachter Nachrichten, Germany

“Pasi Pitkänen’s graphic novel-style illustrations are mostly rendered in a dark palette and at times run across several pages. They are an ingenious addition to the exciting stories with their numerous references to the world of comics and sci-fi.” – BN Bibliotheksnachrichten, Germany

“Short, exciting and comic-like make for easy entry to the dystopian plot that is genre-rich and moodily illustrated, but also entertaining and relevant to the target group’s themes.” – Leipziger Lesekompass, Germany

“Kepler62 is more than a book – an extraordinary science fiction series that captivates readers with all mediums of art.” – Heilbronner Stimme, Germany

“…an extraordinary children’s book, which I initially would never have thought the daughter would be so captivated by. In the best science fiction tradition, underlined by fascinating illustrations, everything revolves around a mysterious computer game and an extraordinary space mission.” –Mama im Ländle blog, Germany