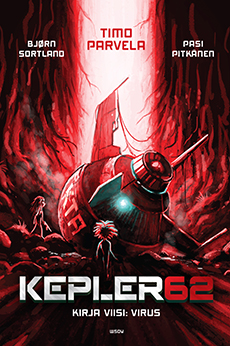 Olivia finally reveals the truth, but it’s terrifying. Back on earth, computers are gaining power and they’re already unstoppable. They’re capturing people, their main competition when it comes to energy consumption, and killing them. In order to survive, humankind must escape earth – and Kepler62 is their destination of choice. Unfortunately, the Whisperers are too powerful to exist alongside humans, which means they need to be eliminated before any more people arrive. Joni, who is carrying a virus that’ll wipe them out, is chosen. But he’s distraught and goes into hiding. Meanwhile Ari and Marie discover that the extra travel capsule on the space craft is now open and empty. Whoever was in there is awake and they’re loose on Kepler62…