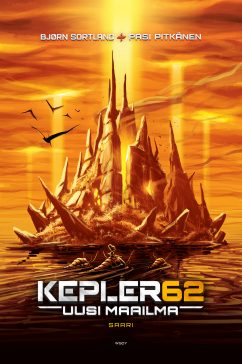 Kepler62 The New World 2: The Island

Marie’s group are convinced that Vallvik should be their leader, which means that Marie – Vallvik’s daughter – faces pressure to step up in his absence. Marie is surprised to find that she rather enjoys being adored by the others. Is she more like her father than she’d like to believe? But soon her step-sister Olivia starts questioning Marie’s choices, which doesn’t bode well for their relationship. Marie can’t trust Olivia, who still seems to be keeping secrets from her – secrets that involve their father. Marie is convinced that her father is a threat and decides that it’s her responsibility to stop him. She finds out exactly which strange island he’s on and, without thinking about the danger she may face, decides to confront him. But what awaits her?

“The package is well put together….a great action story as well as a relevant discussion of important questions about right and wrong, power and morality. Reading the book, adults will be reminded of William Golding’s The Lord of the Flies, and many of Marie’s dilemmas belong to the fundamental questions in literature and ethics. On the surface, this book is suspense literature, genre-smart and well-composed. Upon reading, the book feels like a series of fundamental choices for Marie. Both children and adults will appreciate this combination which embodies the essence of science fiction at its best.” – Aftenposten newspaper, Norway

“The details and the plot of Parvela and Sortland’s ambitious series are carefully polished. The series gets off to such a flying start that you are powerless to resist the pull of its most extraordinary world.” – Savon Sanomat newspaper

“Pasi Pitkänen’s illustrations are a major part of the book and in places the particularly dark pictures, which speak volumes, create powerful additional tension alongside the text… [The illustrations] are so well-placed within the text and are so successful that the pictures immediately catch the reader’s eye, move the story forward and, at the most exciting parts, even send a shiver down your spine…” – Nuorille ja naperoille blog