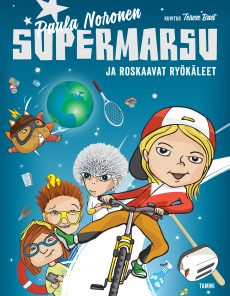 Super Furball and the Litterbugs

Rubbish is literally falling out of the sky — it’s time for Super Furball to step in!

Strange objects are falling from the sky: buckets, toasters, shoes, banana peel… one item even hits the teacher’s head and another hits the news reader in the middle of a live broadcast.

At first, the debris rain is kind of funny, but it doesn’t sit well with Super Furball Emilia. She goes to meet Great Guinea, who usually knows what’s going on in the world. Could a distant planet be involved somehow?

At the same time, a new student join Emilia’s class. He seems pretty normal, but there’s something not quite right. Could he be from another planet?

When Emilia’s mother tells her that she’s marrying Pertti, Emilia’s had just about enough — will she ever be able to solve all of her problems?