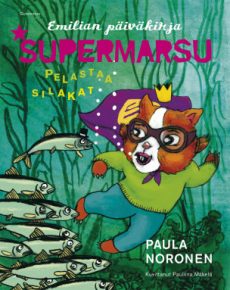 An action-packed series filled with dry, absurdist humour about a young girl who has the ability to turn into a guinea pig superhero… it’s like Aki Kaurismäki for kids!

Once a decade Great Guinea gives a human being superpowers, and he’s just chosen eleven-year-old Emilia!

The summer holidays are over and it’s time to go back to school. But, oh no! Emilia’s school has moved into a temporary building due to unstoppable mold!

To make matters worse, Emilia’s mother has found herself a new boyfriend and her friend Simo has become a consultant: he’s started wearing a suit and talking like a grown up! To top it all off, Great Guinea has just given Emilia a very important assignment: it’s up to her to save the Baltic Sea!

“I googled ‘Baltic Sea’ while I was in the school library today,” Emilia writes in her diary. “It’s absolutely ginormous and its deepest point is 450 metres! Not even a Super Furball can clean something that big!” Will it all prove too much for Emilia, even with her superpowers?

When Middleton the guinea pig bites eleven-year-old Emilia, he gives her superpowers. After a meeting with Great Guinea, the head honcho of the guinea pig world, all she needs to do is take a sip of Middleton’s water and she transforms into Super Furball! The one condition is that Emilia keeps her super powers a secret. As Super Furball she can squeeze into impossibly tiny spaces, lift up houses and even travel forwards in time! This is an environmentally aware series whose characters — both adults and children — have a wickedly dry sense of humour.

The first Super Furball movie was met with rave reviews when it was released in January 2018. It’s been a huge success, with over 100,000 people flocking to the cinema to see it!

2009, nominated for the Finlandia Junior Prize