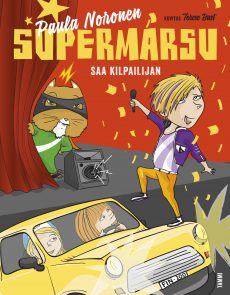 Who is the real hero, Super Furball or Super Snake?

Great Guinea is giving Emilia an alarm band, since Super Furball is needed more and more! Emilia doesn’t mind one bit, because being Super Furball is the most fun she’s ever had. Everyone at school is excited: the adorable teen heart throb Edwin is due to perform at the school party. Only Fat Antero is jealous.

After the show, Edwin gets talking to the students and asks whether any of them have any special skills. Emilia and her friends boast, saying they can do everything from playing the electric guitar to driving a car. But, help! To everyone’s surpise Edwin wants to come to the school’s 100-year anniversary celebrations in a week’s time, and he wants to see everyone skills in action! Do the students have enough time to develop their skills?