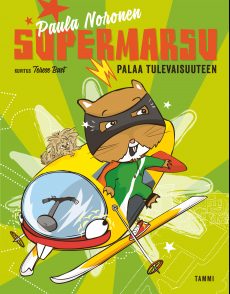 Super Furball’s Flight to the Future

Will Super Furball save her friends from the horrors of the future?

When Middleton the guinea pig bites eleven-year-old Emilia, he gives her superpowers. After a meeting with Great Guinea, the head honcho of the guinea pig world, all she needs to do is take a sip of Middleton’s water and she transforms into Super Furball! The one condition is that Emilia keeps her super powers a secret. As Super Furball she can squeeze into impossibly tiny spaces, lift up houses and even travel forwards in time!

In the seventh Super Furball book, Emilia finds a cute stray dog which she decides to look after with Simo. Neither of them are allowed to take the dog home, even though Emilia thinks it’s rather strange that the smell of a dog would bother her mother. After all, her step-father’s socks stink and he likes to bark at the TV too!

That’s when Great Guinea steps in and takes Emilia to the future – all the way to the year 3,000. Emilia is horrified to learn that pet dogs have become extinct and nowadays super-dogs are bred on farms. They’ve become odourless animals that don’t annoy anyone. Super Furball must find out who is setting up these farms in the present so that she can put a stop to it before it’s too late. But who could be behind all of this?