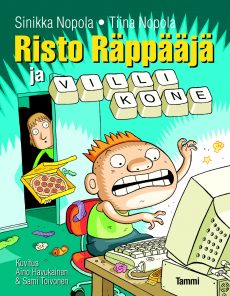 Recently Wills has taken to spending all his time alone in his room.

No requests for food or company. Aunt Rose thinks he’s into poetry as she hears him occasionally hollering “ou-ou- ou”. But Alfred Lindberg soon identifies the sound. It is not poetic, rather it’s futuristic! Wills has become completely addicted to computer games and is in a state of gaming frenzy. Something must be done and fast! Alfred helps by confiscating the computer but soon that familiar “ou-ou-ou” can be heard coming from his flat instead!

While Wills has been in his hermit-like game-addiction stage, it seems that neglected Nelli has developed a huge crush on a cute pop singer Billy Storm whose concert is only days away. Rose eventually manages to rehabilitate Mr Lindberg from his gaming bout, and Wills does something so heroic that it earns him a place on stage with the famous Billy Storm himself! Nelli can’t believe her ears, nor eyes, when Wills performes a rap about her! “Nel-li, oh Nel-li, you turn me into jel-ly” raps Wills on stage. Just like that, his gaming days are forgiven.