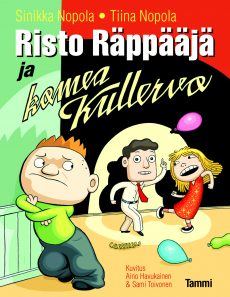 Can your rival become your friend?

Wills and Nelli meet their new neighbour Andy. He never makes a mess, never raises his voice and never even picks his nose. Nelli is taken with Andy’s long eyelashes, whereas the jealous Wills can’t understand what Nelli could see in this boy who is afraid of the oddest things. But what happens when Wills gets into trouble? Can Andy get over his fear to save Wills?