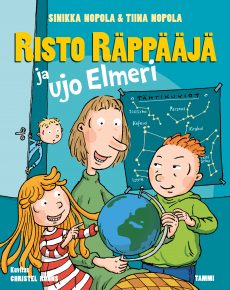 The McFinns set out to “cure” shyness – with surprising results!

Auntie Rose becomes the face of a campaign to combat loneliness in young people. To fully understand her new role, Rose invites a shy boy to stay with her for a week in the hope of helping him become a bit braver. That’s how Elmer ends up staying at the McFinn household with Rose and Wills.

Wills tries to encourage Elmer to be brave by giving him plenty of things to do. The kind Elmer does as he is asked and soon enough Wills realises that he’d make a pretty good assistant. When Nelli finds out, she gets cross with Wills for bullying Elmer. Nelli also asks whether being shy is necessarily such a bad thing. Eventually Rose, Alfred and even Auntie Fran get involved in answering the question. And, in the end, it’s Elmer himself who surprises everyone!

The Wills & Nelli books by Sinikka Nopola (b.1953) and Tiina Nopola (b. 1955)  have been popular in Finland for over 20 years. Now films, plays and songs that are based on the books are further increasing their popularity.