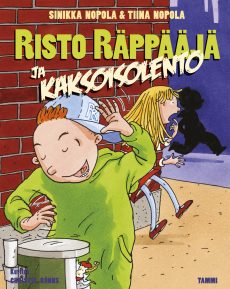 Nelli spots Wills in the street and shouts after him but Wills doesn’t seem to hear her and just disappears around a corner.

Rose is surprised when she sees Wills in the shops as Wills is supposed to be at home, vacuuming. Alfred, their downstairs neighbour, invites Wills fishing but Wills does not turn up at the lake at the agreed time. What is going on?

“It’s a conman – someone acting as my doppelganger,” Wills says, angrily.
Rose is frightened. Especially when she hears tales of shadowy beings that suddenly appear in some people’s lives. “What if this double is a parallel image of Wills?” she wonders.
Wills and Nelli decide to uncover the identity of the double. Why has that boy suddenly appeared in town? Why is Rose hiding her photo album away? Does it contain something that points to the answer?
Wills and Nelli track down the album and find a clue. By the end of the summer, all of their lives have changed: this doppelganger has opened the window to a world they never even knew existed.