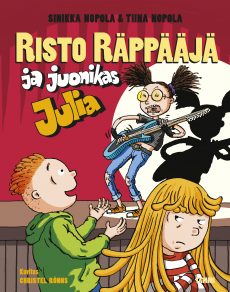 A rapping rascal is on the run!

Wills and Nelli meet Julia, a girl who raps, plays guitar, and even performs her own gigs. Julia hears one of Wills’ raps and thinks it’s better than her own. She decides to perform Wills’ song – and it becomes a hit! Wills is flattered by the attention and writes another rap for Julia.

Soon enough Nelli realises that Julia is taking advantage of Wills and, along with Auntie Rose and Auntie Fran, she tries to intervene.

But Julia gets caught up in her own scheming and, before long, the reason for everything is revealed…

The Wills & Nelli books by Sinikka Nopola (b.1953) and Tiina Nopola (b. 1955)  have been popular in Finland for over 20 years. Now films, plays and songs that are based on the books are further increasing their popularity.