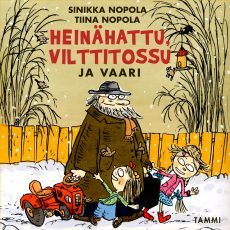 Grandpa comes for a surprise visit.

The girls are thrilled, but their mother soon gets tired of waiting on him and decides to get a real job instead. She starts her new job as a Knapperware consultant. At the same time, the family grow baffled by a set of strange footprints that appear in the yard during the night. It’s time to call the police.