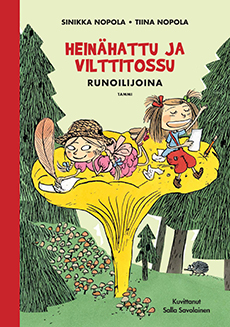 Ruby and Ficelle’s mother enrolls her daughters in a poetry competition, hoping that writing will help stop their bickering.

The local police officers agree: “poets are unlikely to have sticky fingers.” As expected , the studious Ruby receives thanks for her lovely poem about mushrooms, annoying Ficelle in the process. But when Ruby’s winning poem is read at the awards ceremony, the audience is flabbergasted: who has sabotaged the poem by inserting poop and toot jokes? And why is Ficelle the only one to praise Ruby’s work? Can the budding poet’s reputation be salvaged?