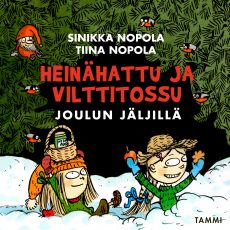 Christmas is coming and the preparations are well underway.

Grandpa tells Ruby and Ficelle a story about an elf that had to be kept content by giving him treats. Then the oddest things start happening as food disappears from the cellar. All family members are suspected in turn, and even the Misses Alibullen and the town policeman fall under suspicion. But could it be the elf who is stealing the food?