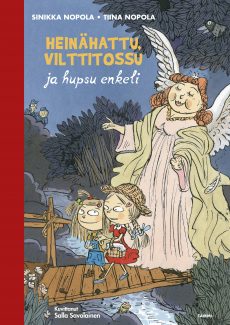 Ruby & Ficelle and the Silly Angel

Ficelle suggests that their neighbour Miss Halise Alibullen should play angels with her.

Kind Halise finds herself agreeing and is soon sporting a frilly dress and a pair of homemade wings while stepping out into the woods with Ficelle. But then Halise sprains her ankle and Ficelle must run to get help. She runs and shouts: “Come quick, there is an angel in the woods!” Constable Portly is the first one to hear and rushes to the scene. He is convinced he’s about to meet a real angel! But when he gets there the angel has disappeared! Where? How? The mystery must be solved.

Sinikka Nopola (b. 1953) and Tiina Nopola (b. 1955) have been in a successful authorial partnership for over 30 years! Ruby & Ficelle, which was published in 1989, was their first co-authored book and it marked the beginning of their award-winning career in books, films, plays and music that continue to delight and entertain new generations.