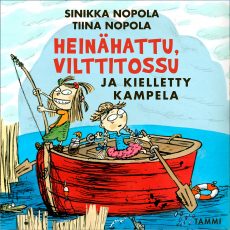 Ruby & Ficelle and the Forbidden Fish

When Ficelle’s mom forbids her from eating her favourite fish, the annoyed Ficelle decides to take Ruby along and go fishing for her supper.

The trip does not go as planned and the girls end up spending an interesting night on an island – with their mom in tow! Eventually someone comes to their rescue… but who is their hero?