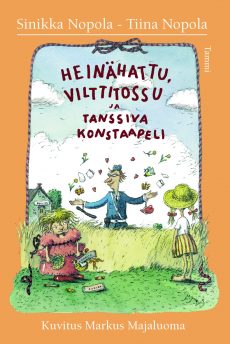 Ruby & Ficelle and the Dancing Constable

Ficelle wants to be a bridesmaid and gets busy with Ruby to make it happen!

They must arrange a wedding for the summer! They find the perfect bride right next door, and begin to write proposal letters to the chosen groom. The letters cause some upheaval and excitement at the police station. But will Ficelle get her wish?