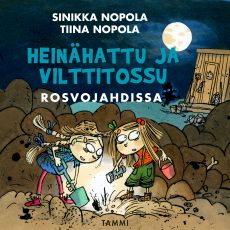 Ruby & Ficelle On The Chase

Ruby and Ficelle’s summer suddenly gets a lot more exciting when they meet Bill Buckwheat, a young boy visiting the Misses Alibullen.

At the same time, archaeological excavations commence on the Alibullen’s plot. One night, a precious piece of jewellery disappears from the burial ground. The town policemen arrest one of Ruby and Ficelle’s family members, and in an attempt to prove the suspect’s innocence, Ruby, Ficelle and Bill go after the thief in a fierce chase.