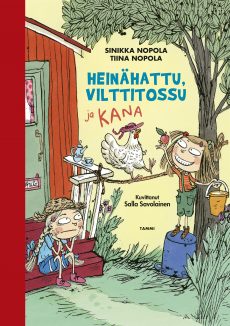 A winged pet plays havoc with the family pecking order!

Ruby is away at a camp and Ficelle is feeling lonely. Feeling sorry for her, the Alibullens give Ficelle their cousin’s hen, Anita, for the week. Ficelle cheers up and manages to tame Anita, who starts sleeping indoors and learning tricks.

Ficelle dotes on Anita and pushes the hen around in a doll’s pram. When Ruby returns, however, she’s less than impressed! In fact, she’s shocked to find a chicken sleeping on her pillow! And she’s bored of hearing Ficelle go on and on about how wonderful and smart Anita is. Ruby is relieved when the Alibullens declare that it’s time for Anita to go home. But then Anita mysteriously disappears! Ficelle thinks the hen must have run away but Ruby is not so sure.

A funny story about how jealousy can peck away at sisterhood – with hilarious consequences.

Sinikka Nopola (b. 1953) and Tiina Nopola (b. 1964) have been in a successful authorial partnership for over 30 years! Ruby & Ficelle, which was published in 1989, was their first co-authored book and it marked the beginning of their award-winning career in books, films, plays and music that continue to delight and entertain new generations.