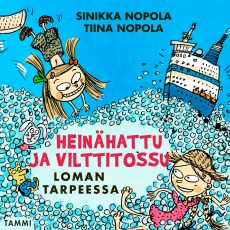 By this time of the year Ficelle is feeling tired and lazy – surely it is time for a holiday?

Unfortunately her dad is not ready to think about going on a holiday before he is assured that they are all safe. He insists that they spend their holiday doing fire drills in their own house. Eventually the drills are over and they go on a real holiday – but soon realise it isn’t quite as relaxing as they’d thought.